China’s boisterous tourists; an afternoon along the Lijiang river in Xingping, Guilin

“How old are you?” I’m attempting to maintain a conversation but I’m struggling to keep my balance on the roof of a rickety tour boat chugging along the Lijiang river. I want to take in the breath-taking, deep green bumpy mountains around me, but I can’t help but fixate on the gaping rusty hole just inches away from my already sprained foot, which could easily see me roll over and into the choppy river.

“The same age as you haha!” a boisterous, middle-aged Chinese man suddenly grabs my shoulder and beams at me. He’s been heckling at almost every boat we’ve passed – at one point he managed to rally the entire 30 people on our roof to start chanting and dancing. I don’t recognise the songs, but not before long both boats are laughing hysterically, jokingly hurling abuse at one another. He’s added me on WeChat, and his name is “A刘总+刘氏美甲纹绣批发+广州深圳” – from this I assume he runs a manicure and wholesale business in Guangzhou and Shenzhen.

The boat tour cost 60RMB and lasts for 90 minutes – circling a small strip of the Lijiang river from the small ancient village of Xingping, which sits south of Guilin and north of Yangshuo. It is estimated the first settlers came to Xingping in 265AD, which lends a history of around 1,700 years. The lanes are winding and narrow, the buildings crumbling and stamped with green mould from the damp air, and the people exceedingly friendly. 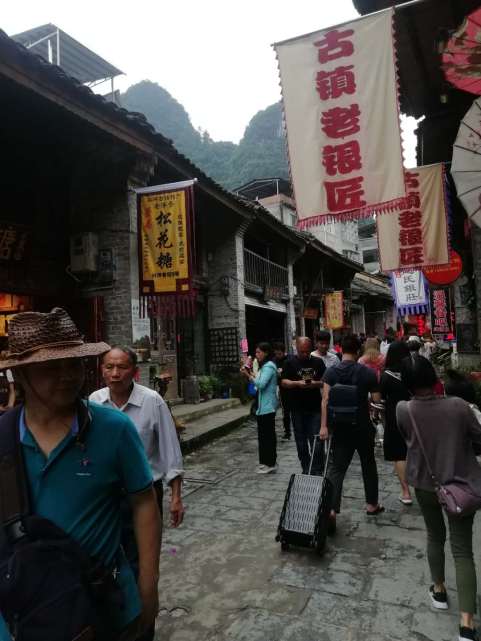 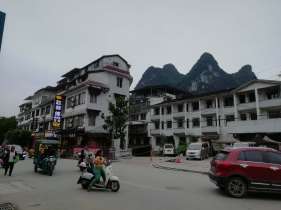 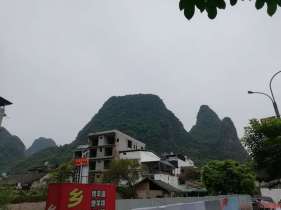 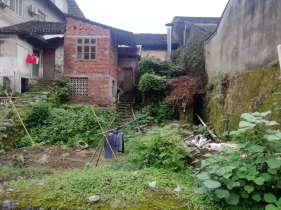 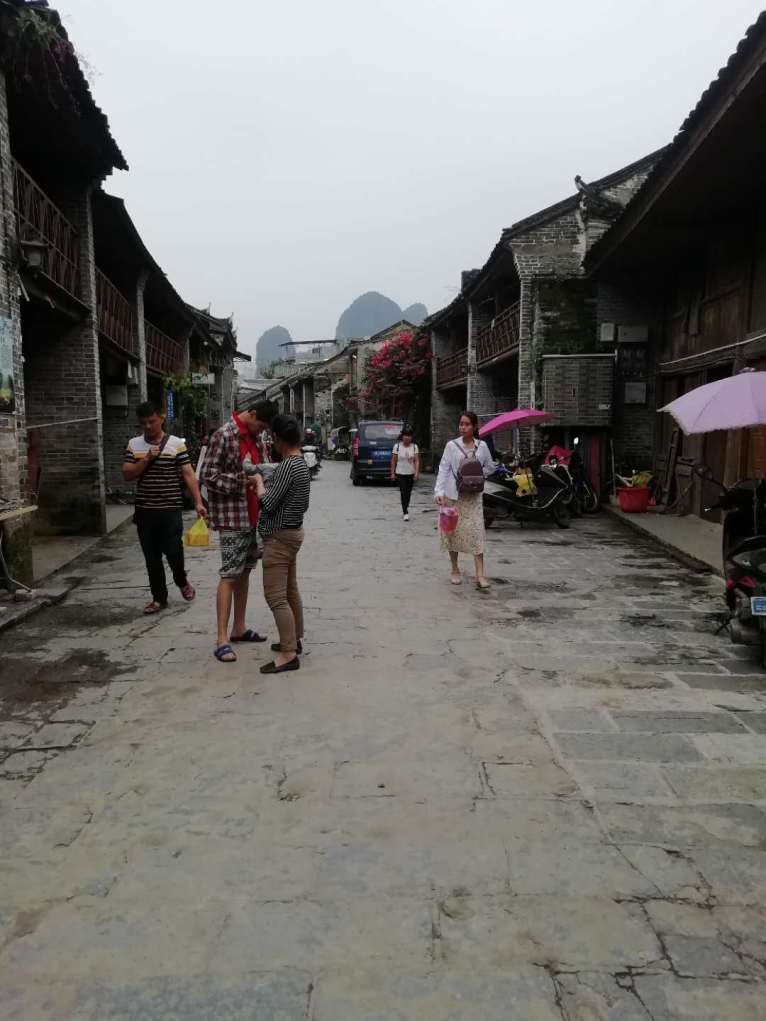 I took the high-speed train from Guilin to Yangshuo, and then the bus from Yangshuo to Xingping. By the time I arrived in the early-afternoon, I was starving. I bypassed a rather out-of-place Indian restaurant, and practically stumbled into a small, empty restaurant ordering a steaming bowl of 崇善米粉 – Chongshan Rice Noodles, considered the best representative of traditional Guilin rice noodles.

I chatted with the owner; a friendly 29-year-old named Stan. Originally from Xinjiang province in the north-west of China, he began to travel extensively around China and after tiring of his travels, decided to stay. He tells me: “我觉得阳朔景色很美，人也很朴实 – I think Yangshuo’s scenery is very beautiful, and the people very down-to-earth.” “老年人和年轻人来的都很多，因为桂林山水从小都在课本里了解，每个中国人都会来一次 – Many elderly and young people come to Guilin because we learn about the landscape in our textbooks at school; every Chinese person will come (at least) once. On the reverse side of a 20RMB note, a fisherman is floating down the Li River through the spectacular karst mountains of Guilin, on a bamboo raft.

Stan’s food is yum, and I consider asking why his restaurant is empty (perhaps given the strong smell of urine, which could be from his restaurant or the street, but I can’t tell), so instead I ask about the local economy. He says: “阳朔的经济主要依靠旅游业，现在中国人的旅游意识提高了，老百姓手里也有钱了，出来玩的相对也比较多了 – Yangshuo’s economy mainly relies on tourism. Nowadays, the Chinese people have a heightened sense of travel, and even ordinary people have money, and want to go and travel/explore (the word 玩 means play but is so used so often it simply means “to have fun”). Say to any Chinese person “咱们去玩儿吧 – Let’s go and have fun!” and I guarantee they’ll smile.

And have fun they do; after chatting with Stan, I head over to the river shore and jump on a tour boat. The entire boat ride seems to be an aggressive photo shoot. The captain attempts to talk about the history of the ancient village and of the scenery, but his efforts are drowned by the passengers barking loudly about when they can get up from their seats and take photos. Passengers are given a ticket number in groups of 3 or 4 and are called up to the front of the boat to take photos of the landscape with two emancipated birds tied to a pole. 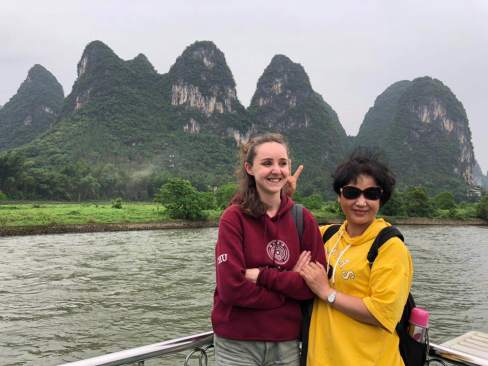 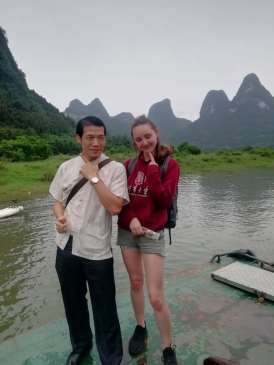 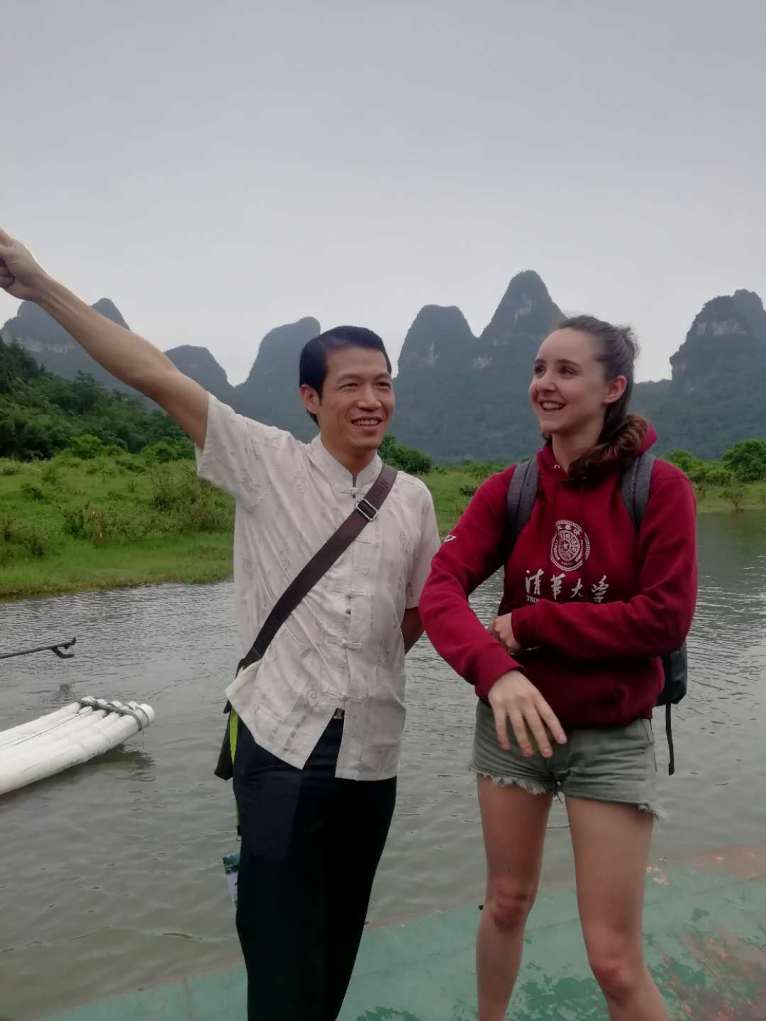 A is in my photo group – “OH MY GOD YOU CAN UNDERSTAND CHINESE” he bellows, and the entire boat turns around to gawp at me. I smile and say “大家好 – Hi everyone”. They all start clapping and I am mortified. Now is not the time to be British and awkward.

Later, we are allowed on the roof. I let the crowd rush ahead of me; their stamping feet on the roof is outrageously loud from where I’m sitting. It sounds like a hundred people have started bashing against tins and I wonder whether the roof can sustain that many people, so I hastily make a move and join them before the roof caves in.

I join a group of around 10 middle-aged people who I’ve heard speculating about me. “She’s Russian!” – the leader of the pack is confident and strides over to ask where I am from in Russia. I tell him I’m British, but he insists I’m Russian. I even get out my passport, but he waves his hand “听不懂 – I don’t understand!” and starts to get angry.

His friend brings over a small bottle of 白酒 – white alcohol (often +40%) and together they light a cigarette. I try to ask where they’re from, but they speak with a thick dialect and I can’t make out what they’re saying. They laugh at me and throw their cigarette buts over the side of the boat, into the Lijiang river. I can hear A behind me spontaneously break into song, and his group of friends spot another tour boat and begin to throw coins at it, hurling more friendly abuse. 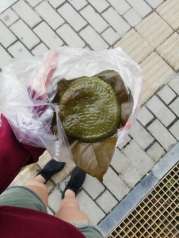 After the tour boat, I stroll around Xingping village on my own for a while, exhausted from the boisterous tourists. I grab what looks like a squished green sandwich from a street food vendor for 3RMB. It’s plastered down stuck to a waxy leaf – I peel it off and bite in, the green goo sticking to my front teeth. It’s a flattened green-dyed glutinous rice ball, with sweet nut filling randomly spaced in the middle.

I start to head back to the bus stop, chewing on the sticky green goo. School has just finished and there is an outpour of little people all wearing bright yellow caps. They clamber onto the back of electric bikes, and into small trucks with tiny wooden chairs dancing around loosely attached trailers. As I weave through the clusters of people, they don’t react to me at all, and it’s quite nice to be ignored.

I see little yellow hats bobbing around under the counters of street food stalls, as parents embrace their children whilst serving customers. The economy may be developing rapidly due to an influx of tourism, which will only increase as China’s middle-class swells, but when compared to first-tier cities such as Beijing and Shanghai, for the Xingping villagers life is still basic.

As the bus pulls out of the ancient village, we pass by a luxurious hotel – “阳朔三千漓the Leisure Tourism Resort” – which, according to its website, costs around 800RMB for a standard room. It looks like something out of a science-fiction film. Even the trees are immaculately well-kept and look like they’ve been trimmed to resemble big green apples. There are children prancing around in white dresses and the staff look fashionably skinny against the voluptuous mountains in the backdrop.

It’s quite the contrast to the school children in yellow caps doing their homework in hole-in-the-wall food outlets, dodging food stains and concentrating through the constant hum of noise. But as long as Chinese people know how to 玩 play, tourism will flock to Xingping, and with it, greater development and prosperity for the local people … even if those tourists are a little boisterous. 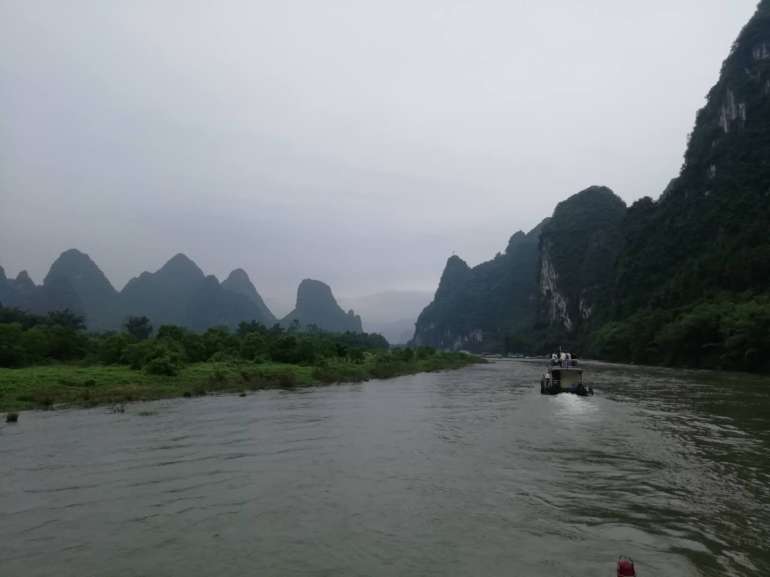