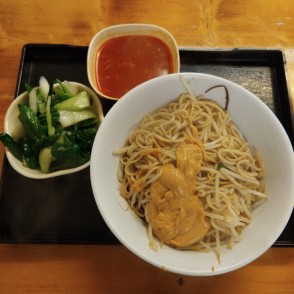 D owns a small restaurant at the end of my road; I’ve been going there weekly since I moved back to Birmingham from Beijing and it is my sanctuary. I always get peanut noodles with veggies, sit at the back on the second table in from the right, and eavesdrop on Chinese students. (I justify this by using it as a way to keep my ear tuned in but most of the time I just end up accidentally listening to couples argue) Nevertheless, D has helped me to better understand the Chinese mentality, and in return I have helped him find tutors for his son. It’s an easy friendship, one based on trust, respect and kindness. I’ve come to get to know D quite well as winter sets in and I find myself craving hot peanut noodles more and more. 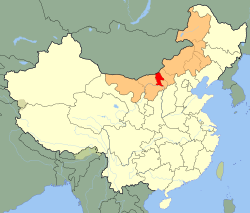 Growing up, D’s father worked as a Doctor in the military. He often used to treat people for free and would cycle on his bike to patients if they were too unwell to come themselves. He earned 90 元 a month and this was enough to feed his family of 8. In the 1950s, D’s family migrated to Baotou 包头 which was one of the first “156 projects” of the “Soviet Assistance Program”. The “Soviet Assistance Program” consisted of the USSR providing China with support to develop its industry during the 1950s until the Sino-Soviet split in 1960. [1] Both nations spent a combined sum of 11 billion元 on “156 major industrial enterprises, including seven iron and steel plants, 24 electric power stations and 63 machinery plants”. [2] Located in the Inner Mongolia Autonomous Region, Baotou包头has a population of roughly 2 million inhabitants, and in 2012 its GDP was valued at 340.95 billion元, [3] much of which comes from its steel production. At the time, Baotou包头 was severely underdeveloped. D’s family, along with many others, essentially built the city from scratch. Initially living in tents, their way of life was extremely basic yet people felt incredibly proud of the work they felt was building up the People’s Republic. D told me that the sense of community was, at times, overpowering. Before the implementation of the infamous One-child Policy in 1979, it was common for families to produce many offspring. Data collected by the UN on the “Total Population and Average Number of Children per Woman in China, 1950-2100” [4] shows the average number of children per woman as; 5.4 in 1960, 2.5 in 1980 and 1.8 in 2000. Hence whilst life in Baotou 包头 for D was unmatched in terms of the comfort, ease and the pace of modern life today, communities were thriving. D called this concept ren 仁. The word itself merits an entire PhD due to its complex and intricate meaning, so I’ll do my best in explaining its significance. According to D, ren 仁 encompasses the way in which one lives one’s life with benevolence and humanity. Further research actually indicated that ren 仁 is “considered the outward expression of Confucian ideals” [5] In fact the two radicals composing of ren 仁 are ren人 (people) and er 二(two) insinuating the way in which two people should behave towards each other. Confucius argued that we are each born with an innate sense of ren 仁, “夫仁者己欲立而立人，己欲达而达人。能近取譬，可谓仁之方也已.” “As for the good man: what he wishes to obtain for himself, he helps others to obtain; what he wishes to achieve for himself, he helps others to achieve – if you can begin from small things around you and use your own aspirations as a guide, you know how to be benevolent.” [6]

D passed the gaokao 高考 which enabled him to go to University. In the years preceding the Cultural Revolution (1966-1976), competition to secure a place at University was fierce as millions attempted to reclaim the right to an education. The region Baotou 包头was given 1 place for a student to attend Xiamen University 厦门大学 for which D was chosen and allocated Business Administration as his major. In China especially, University was, and is considered an opportunity to obtain a (high income) job upon graduation hence among those admitted, motivation and ambition are not lacking. Each week, D had around 25 to 30 hours of lectures and seminars to attend. Beyond this, the majority of his spare time was spent self-studying. He did however join the “Events society” whereby students organised free events for students, and it was through D’s involvement with the society that he met his wife in 1989. Over the 4 year period of Undergraduate studies at Xiamen University厦门大学, D shared a dormitory intended to accommodate 8 students. In spite of the odd disagreement, all 8 still meet up annually, and have gone on to follow successful careers in banking, finance, journalism and academia.  D explained the lifestyle at University was notoriously basic and the majority of students relied on government bursaries to finance their studies in spite of inexistent tuition fees. D managed to live on 50-60 元 a month and would return to Baotou 包头 for the holidays, finances permitting. Returning home was not only bound by financial constraints – the train journey from Xiamen 厦门to Baotou包头took 42 hours. One of D’s roommates originated from Xinjiang新疆 taking him an outstanding 7 days of travel to return home from Xiamen厦门, (a distance of around 4500km). Conditions were often cramped and in summer the trains were not equipped with enough water to keep passengers hydrated. One memorable train journey saw D spend 30 minutes squeeze his way through a half a train carriage (approximately 12 metres) rammed full of people.

Upon graduation from Xiamen University 厦门大学, D became restless and in pursuit of a larger city, he decided to undertake a Postgraduate in further Business Administration in Tianjin 天津. In 1995 he started working in Nanjing and successive promotion saw him rise to the Deputy General Manager of a State-run Pharmaceuticals company. Due to a combination of office politics, bureaucracy and a constant pull to explore corners of the world beyond China’s borders, in D applied for and won a national scholarship to attend Manchester Business School in the UK as a visiting scholar. Provided with a monthly stipend of £300, D lived off £10-15 a week primarily by cooking for himself. The English language was an initial barrier due to the confusion of several colloquial expressions such as, “Hey, mate”, “To take the piss” and “Bloody hell” which are not seen in conventional English textbooks approved by the National People’s Congress for Chinese learners.

Shortly after the birth of D’s only son, he commenced a PhD at Manchester Business School on Mergers and Acquisition (M&A) activity of recently privatized Chinese companies.  Unfortunately, after only 2 years the funding dried up leaving D to pursue other interests in order to support his family. Based on his wife’s suggestion that they prioritise their son’s education, they moved to Birmingham. D stressed his family is the most important thing to him. Half of his income is spent on his son’s education including private school tuition fees, tutors and extra-curricular activities. When he has gone through higher education, the same as many Chinese parents with means, D intends to buy his son a car and apartment, and his son is bright; during his GCSE’s he won gold in an A level mathematics challenge and was amongst a cohort of only ten external students to be accepted at his Sixth form college. With the hope of doing something meaningful, D opened his restaurant in December 2016. At lunchtime and in the evenings it is regularly filled with both Chinese and non-Chinese customers. Around 60-70% of his customers are loyal, and a group of Doctoral students come every evening without fail. Every time I go in, I’m greeted with a smile and food is always comforting and delicious.

*The subject’s permission was granted on 7th December 2017 before publication of his story “D, 49, Baotou包头” on the blog 66hands.wordpress.com