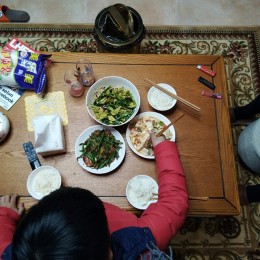 R and I met on a sub temperature morning as he picked me up from Yan’an station and drove me to his hometown, Yanchuan. My first impression of R was of gratitude and respect. A local PE teacher and hot pot restaurant manager, he had wanted to set up a short English language course for local children so that they could have hands on experience conversing with native English speakers. Although the language course couldn’t go ahead having recruited a single student, R nevertheless welcomed me into his home and was intensely hospitable. We spent many evenings discussing China’s education system, social mobility and ‘aliens’ – rather more commonly known as foreigners.

The first time R left Yanchuan, he was 21 years old. Before that he had only ever travelled within the County. He told me he don’t like travelling as he never has time: every day he wakes up at five o’clock in order to look after his nephew, manage the restaurant, teach PE at the local primary school and visit friends to keep up good relations within the area. R wants to marry his girlfriend (whom he always prematurely referred to as ‘my wife’) and at aged 29 and 28 respectively, it is expected of them both to promptly marry and soon after start a family. Nevertheless R claimed he must firstly save enough money for them buy a house and a car.

One evening R confessed he wasn’t sure if his girlfriend really loved him due to his financial situation. Although his girlfriend had been adamant about not having children, R didn’t see this as an option and told me he would like at least one child in the future. When I asked him why not two (in October 2015 Xi Jinping declared families would be able to have two children instead of two, with the change in policy coming into effect on the 1st of January 2016[1]) he answered that there are already too many people in China, and that he wouldn’t be able to support two children. Hence one child could have a more fulfilling life with the entire focus of two parents.

As a child, R enjoyed studying English. Out of his entire friendship group, R had the most impressive grasp of English yet received the lowest salary. One of whom was a doctor, a local government worker in the department of food safety and regulations, and a Chemistry teacher.  Nevertheless R enjoyed his education primarily due to these friendships, all of which still live in the same town to this day. However we soon stumbled across a darker aspect of the Chinese education system. The gaokao: a gruelling 9 hour exam, usually spread over two days and scored from 0-750 with a grade of 500+ gaining one admission into University. Seen as a once in a lifetime opportunity for social mobility, families put intense pressure on their child to succeed. Yet according to the Economist, “less than 0.2% of gaokao takers will get into China’s top five universities[2]”

Studying from dawn until dusk, a small minority unable to cope with the pressure are plagued with clinical depression, and it is not unheard of for students to commit suicide in the weeks leading up to the exam. R explained in certain cases the immense pressure from one’s family can instead drive students to rebellion creating family feuds that can last decades. A consequence of the one child policy, parents and grandparents rely on a single child to provide for them in retirement. When I asked R if he thought it was damaging for students to undergo such an exam, he explained that it is a fair system in so far as it offers those with little opportunity to go to University, education being one of the only ways in which to break out of poverty. Hence for better or for worse, the gaokao undoubtedly changes lives.

R and his friends were immensely curious about life outside of China. The questions R directed at me were as follows: How much does it cost for a bottle of beer and water? Are Westerners really as open about sex as portrayed in TV shows? Why do people in the West think that Taiwan is not part of China? It is worth mentioning here that coming from a small County, much of their perception of foreigners is based on information from CCTV (China Central Television) and a limited selection of American TV shows. Furthermore walking around Yanchuan, it soon became obvious many people had never seen a foreigner in their lifetime.

R struck me as emphatically patriotic, and was baffled as to why foreigners assume China is not always seen as very open. He told me that in actual fact, people are allowed to publically criticise the government and their policies. I asked him if people could campaign for an alternative party to the CPC (Communist Party China). R said the Chinese people wouldn’t do that. People are happy with the party and that everyone respects and admires Xi Jinping (fondly nicknamed Xi Dada) who, according to R, has brought about an increase in international trade, GDP and quality of life for many, as well as tackled corruption at the highest levels in government.

Determined to lift himself into the upcoming middle class, R reassured me the accelerating pace of Chinese development is providing numerous opportunities for people like him to break out of the cycle and earn their fortune. Research conducted by McKinsey estimates that by 2022 urban household income may double to an annual figure of 60,000RMB to 229,000RMB[3]. Despite the difficulties in his life, R was certain he would be part of this forthcoming bracket of society. He told me he dreams of taking his wife on holiday to the UK, putting his child into international education, and providing his parents with a comfortable life throughout their retirement. When I asked R the two most important things in his life, he replied ‘money and my wife’.